Carlton Jackson was prepared to be bored when he showed up to vote Saturday in South Philadelphia. The long line of people waiting to fill out and hand in ballots snaked along two sides of the High School for Creative & Performing Arts (CAPA).

But Jackson got some surprise entertainment from Movemakers Philly, a youth hip-hop dance team. The dancing kids and music from the DJ had voters clapping to the beat and shooting video on their phones outside the school on South Broad Street. Jackson posted a recording on social media, thinking the video could motivate others to vote early.

“With this making it more fun, it gets people to come out,” said the 47-year-old South Philly resident who, at that point, had been in line an hour and a half. “It doesn’t seem that long.” 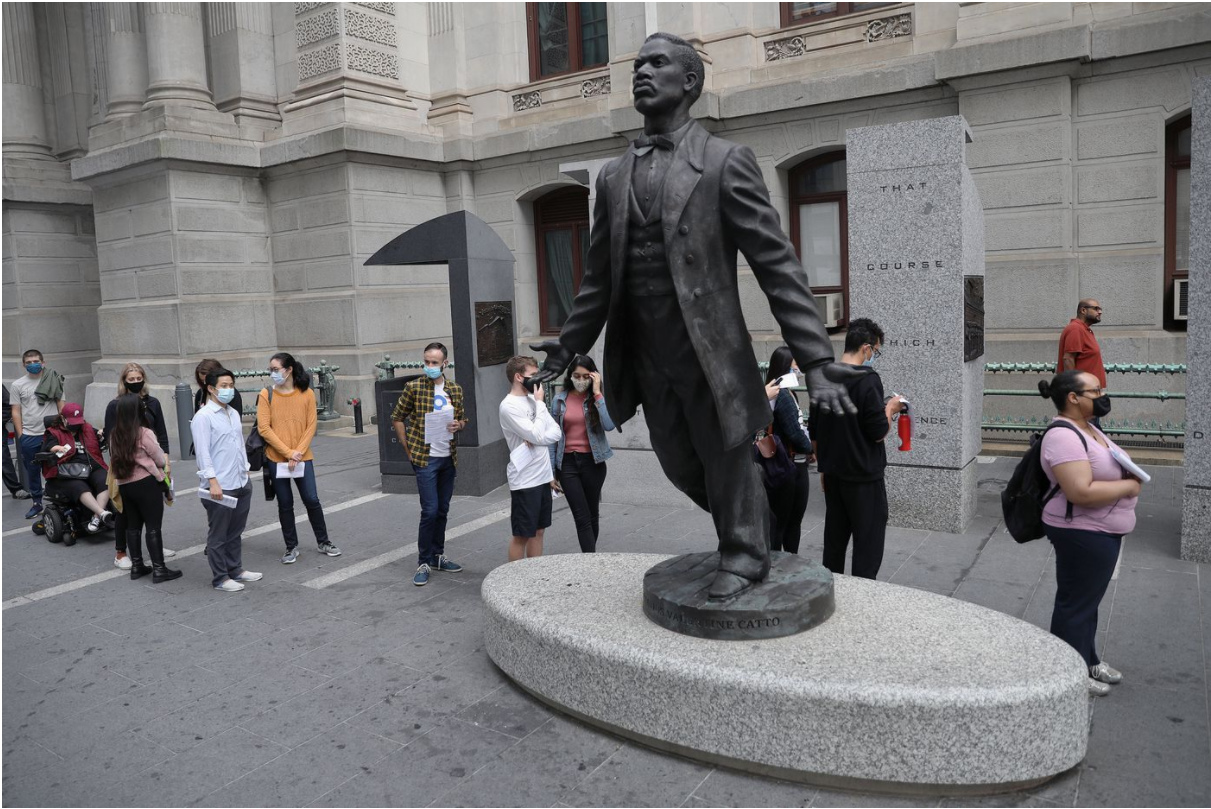 TIM TAI / STAFF PHOTOGRAPHERPeople wait in line to cast mail-in ballots behind the statue of Octavius Catto, who advocated for Black suffrage, outside Philadelphia City Hall on Saturday, Oct. 24, 2020. A number of early voting sites, where voters can request and submit mail-in ballots, are open across the city.

Elsewhere in the city, Resistance Revival Chorus — a group of women and nonbinary singers who perform protest songs — was to sing at Tilden Middle School in Southwest Philadelphia. The show was part of “Joy to the Polls,” a series of mobile concerts to entertain early voters set up by the Election Defenders, volunteers organized by national progressive groups.

Before noon, the line of voters at City Hall stretched along the south side, where the wait time was up to two hours, some voters said. But the perception of time seemed to vary, with voters just a few spots from each other offering widely different estimates.

The “Black Bikers Vote” Ride was hosted by the Rev. Mark Tyler, pastor of Mother Bethel AME Church in Center City, who is also codirector of the POWER Interfaith Live Free campaign. POWER represents more than 100 congregations in Southeastern and Central Pennsylvania.

Said 64-year-old rider Aaron Atchison, from Willingboro: “We have fought the system for a long time in trying to get our rights to be equal, and that’s what this is all about.”

In recent weeks a Philadelphia area relative who I hadn’t heard from for months texted me to say he was delivering a ballot in person because he doesn’t trust the process of signature-validation for mail-in ballots. He asked what I was doing about voting, then didn’t reply when I told him. An American acquaintance who has lived in Berlin for years innocently wanted to confirm I knew how to vote from abroad. She was aghast when I said I had no plans to register or vote.

I read these articles, flip through the pictures, and I recognize this place. The morbidly obese stand behind the statue of a man who advocated for Black suffrage — not black suffrage but Black suffrage. This is important. The singers who are women and nonbinary are part of a Resistance Chorus who will heroicly wait in two hour lines to fulfill their sacred task as Election Defenders. Sacks of fat oozing out of shiny leather waddle to 1,250cc monstrosities and roar about the city. They have fought the system for a long time in trying to get their rights to be equal, and encouraging the recording of cellphone videos of dancers to post on Twitter and Facebook is what this is all about.

These nonbinary Resisters, these Election Defenders, are casting votes for Joe Biden. They display POWER. They live free. They will awaken Wednesday morning with Joe Biden the president-elect and feel deep relief — the long national nightmare will be over, and everything will now change. They will wake up Wednesday morning with Donald Trump reelected and they will recommit themselves to the long task of working toward the 2022 election, or towards 2024, or perhaps 2026.

Physically distant from Philadelphia, culturally and intellectually worlds away from Philadelphia motorcycle gangs, in 2017 I had lunch with a San Francisco Bay Area high tech engineering manager. I told him of my reading Sheldon Wolin, Chalmers Johnson, Thomas Ferguson on democracy in America, how I found compelling the work of Ivy League academics who detailed the absence of democracy, the deception that was the electoral process. He and I were both quite worried about the damage to the country which the Trump administration would wreak. Given the loss of democracy, given our shared concerns about Trump, I asked what political actions he would take in response. He was surprised by this question. The answer was an obvious one. A bit perplexed, he replied: “Well I vote.”

The ritual is sacred, a duty. Everything depends upon this.